The stately Encino home that real estate magnate Mauricio Umansky shares with his wife, Kyle Richards (The Real Housewives of Beverly Hills), is rarely quiet. But on the day after Rosh Hashanah, it is particularly abuzz. A worker is repairing a fountain in the front yard; a painter is doing trim touch-up near a powder room. Two housekeepers bustle in the kitchen, putting away metal serving trays and china from the previous night’s dinner. In the living room of the couple’s Encino home.

“We just had the family over—about 16 people,” Mauricio quips, barefoot and clad in his “work uniform” of dark denim and T-shirt. He briefly converses with Kyle in what could be described as husband-wife shorthand each time she passes by. As the petite brunette scurries about the Colonial-style home in workout tights, her every step is followed by a German shepherd, one of the couple’s five dogs.

“She’s getting ready for a cover shoot tomorrow here at the house. This year we celebrated our 25th anniversary, and The Knot(magazine) is putting us on the cover,” he explains.

His pride at being married for a quarter century is palpable.

“I work hard at everything I do. I try to do my very best with everything: work, family and my marriage. We’ve done everything together. We created The Agency together, and she’s very supportive of my work.”

The couple has four children, all girls, ranging in age from 13 to 32. The eldest is Kyle’s daughter from a previous marriage, and the couple has three daughters together. Two of the children work at Mauricio’s firm, The Agency Real Estate, as do Mauricio’s father and sister.

“Being the one man in a house of all women works perfectly for me. I’m suited for it, and I absolutely love it. It’s rare that they’re mad at me, but if someone’s mad at me, I can always find somebody that still loves me.”

If his first love is his family, his second love is real estate. He started out as a top seller with his brother-in-law’s firm, Hilton & Hyland (Kyle’s half-sister is Kathy Hilton), and in 2011, along with two cofounders, Mauricio kicked off The Agency Real Estate with a Beverly Hills headquarters.

“We launched it on The Real Housewives of Beverly Hills.” Was that a lot of pressure? “Yes, it was,” he admits.

The cofounders sought to shake up the brokerage landscape with sleek branding and marketing. The Agency offered full marketing support to its brokers, as well as access to a proprietary database they developed that collects and tracks information about high-net-worth individuals. Above: The couple in Aspen, where they have a home, with daughters Alexia, Sophia and Portia. Mauricio also has a stepdaughter from Kyle’s first marriage, Farrah Aldjufrie.

It is no surprise that glitz and glam are part of the brand—Mauricio is not only married to a famous actress but is also uncle to Paris and Nicky Hilton. Those elements also extend to The Agency’s open houses. “We wanted to create an open house experience. Instead of selling a four-bedroom, three-bath home, we sell lifestyle.”

Agency-hosted open houses have featured celebrity chefs (one here in the Valley was a dinner for 60 prepared by Scratch|Bar chef Phillip Frankland Lee), luxury vehicles parked in the driveway, open bars, and champagne-pouring aerialists.

The goal was to create a boutique firm with global reach, and that’s exactly what transpired. Over the past decade The Agency has become a major force in LA’s brokerage business, having been at the helm of some of the city’s priciest deals. The firm has grown to 43 offices with more than 700 agents in the U.S., Canada, Mexico and the Caribbean. With offices in Calabasas and Sherman Oaks, the Agency recently added a Studio City location on Ventura Place.

Mauricio shares that he holds the distinction of selling the most homes in the country priced above $20 million, and his celebrity clients have included Prince, Michael Jackson and former Dodger Adrian Gonzalez. In one of his most high-profile deals, he sold the Playboy Mansion for a reported $100 million.

Unlike some high achievers, he says, his motivation does not come from visual boards or goal setting. “For me it is just a constant need to win. I learned it from my parents, and I was that way with athletics when I was growing up. Now it extends to everything I do. From golf to business, I’ve always been super competitive.”

Ask him if there are any negatives about living a life in the public eye and he admits, “You have to have thick skin.”

That thick skin might have helped him get through what was, by all accounts, a challenging time. Mauricio and his firm were accused of wrongdoing involving the sale of a hilltop property in Malibu in 2016.

The ensuing lawsuit, which spawned additional litigation and a fair bit of negative press, was indisputably complex. Mauricio’s attorneys were quoted as calling it “frivolous.” The case was ultimately settled out of court and Mauricio prefers not talk about it, except to say this: “As a kid, I was taught that life is not fair. And this is one of those situations where life is not fair.”

Above: Mauricio and Kyle moved from Bel Air to the Encino home in 2017, naming it “18 Oaks” for the mature trees that dot the property.

Born in Mexico, young Mauricio and his family moved to LA in 1976. The family settled in a home on Bottlebrush Drive in a neighborhood off Mulholland Drive near Beverly Glen. His dad was a clothing manufacturer; his mom, who had several degrees, worked as a psychologist.

Just half a mile away, on Casiano Drive, child actress Kyle Richards lived with her family. Though Mauricio and Kyle had many of the same friends, they didn’t meet until they were in their 20s.

Mauricio attended school at Steven Wise Temple and the Umanskys proudly count themselves among the donors who funded the temple’s Katz Family Pavilion for Athletics and Culture. He says, “We still go there, and are a big part of that community.”

So how did the powerhouse LA realtor and his “Beverly Hills housewife” wind up in the Valley? Put it this way: It wasn’t planned. The couple raised their family for several years in a cul-de-sac in Bel Air. Then, in 2017, Mauricio invited Kyle to join him on a routine inspection of a new listing—a newly renovated, 10,000-plus-square-foot home on a sprawling flat lot in prime Encino. Both were impressed by all that the property had to offer. The hook for the savvy businessman was the price. He says, “We wouldn’t have been able to afford it—that house in the city would probably be a $45 million house. You get a lot more for your money in the Valley. The land is amazing. We just love the comfort of living here. Shopping is easier, parking is easier, life is a bit easier. So the decision was originally driven by real estate.”

“For me it is just a constant need to win. I learned it from my parents, and I was that way with athletics when I was growing up. Now it extends to everything I do. From golf to business, I’ve always been super competitive.”

The Valley also allows Mauricio to indulge in his love of physical activities. He enjoys golf at nearby MountainGate Country Club, mountain biking at Balboa Park, biking along the Orange Line bike path, and exploring trails in the Santa Monica Mountains above his property. While the family primarily eats at home, his favorite restaurant is Davenport’s, where, he says, “I’ll go alone and sit at the bar and watch a game and eat a nice meal.” 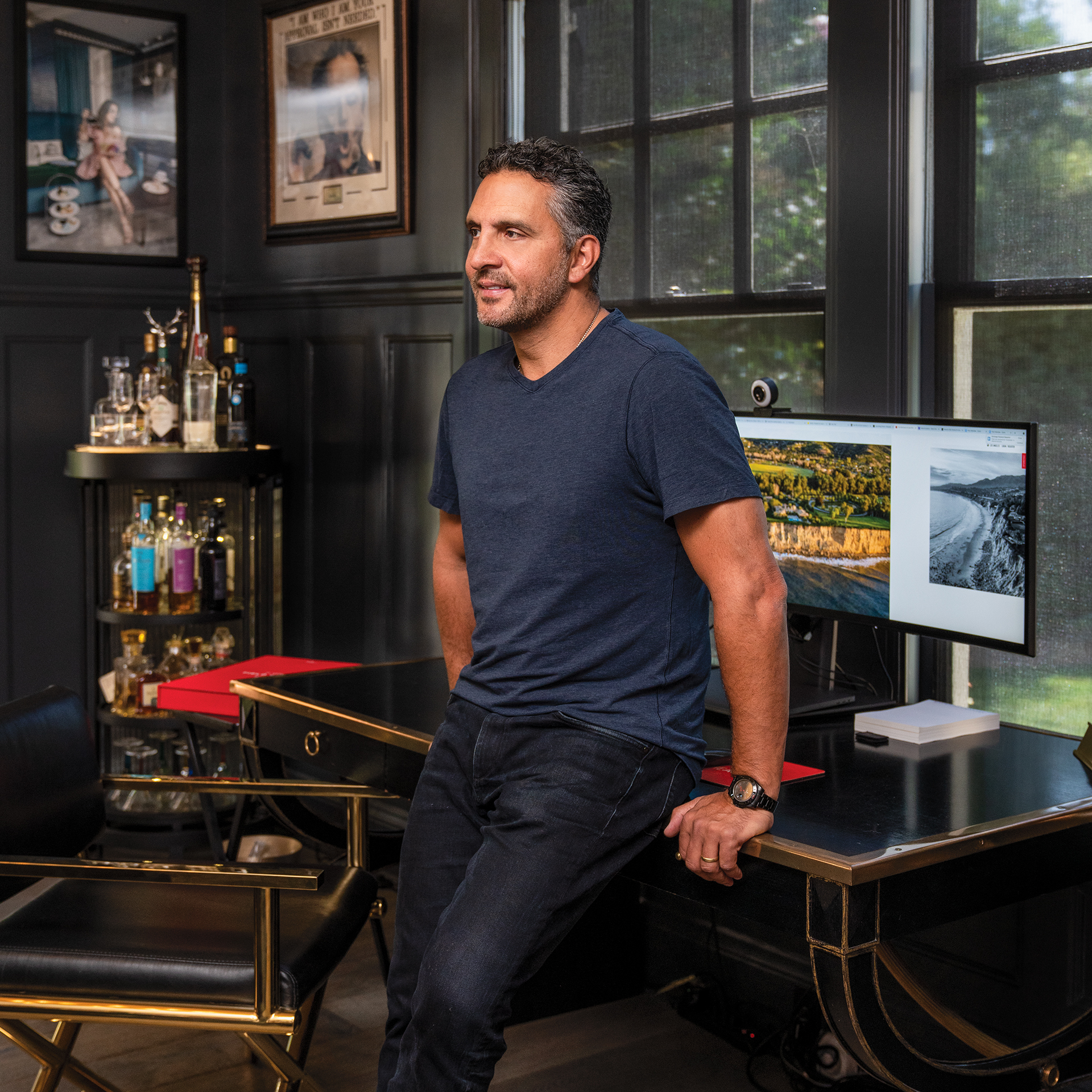 It comes as no surprise that the couple bought a house with some historical cachet. “It’s one of the oldest homes in the city,” Mauricio notes. Previously known as the Smokey Robinson Estate, the house was owned by the legendary Motown singer from 1988 to 2002. Architect Elmer Grey designed the structure, which sits on a flat, 1.8-acre parcel and is dotted with mature oak trees. The architect designed such landmarks as the Beverly Hills Hotel, the Huntington Art Gallery, the Wattles Mansion and the Pasadena Playhouse. The Encino house, built in 1892, was originally on Western Avenue. It was relocated by horse and carriage to the current site in 1912—the first lot to be sold in the city of Encino.

Despite the developer’s tasteful and extensive renovations when they bought the home, Mauricio jokes that it is still not move-in ready. A creek that runs through the property was recently rehabilitated, and the couple is in the process of building a pickleball court and redoing the front and side entrances to create attractive, spacious “motor courts” to accommodate more vehicles.

The house that beckoned them to this side of the hill ticks all the boxes. In addition to a home gym, there is a screening room, pool, multiple outdoor entertaining areas, a vegetable garden and a putting green. The property has been a refuge for the family, especially since the pandemic. “Now, in hindsight, with COVID, it’s been one of the best decisions we ever made, because we have a compound.”

Mauricio is the first to admit that he is fortunate and he has made it a point to give back. His philanthropic work includes serving as a board member for Giveback Homes, as well as supporting Children’s Hospital of Los Angeles and the National Breast Cancer Association.

While acknowledging that his life has been extraordinary in some ways, he says that these days he views his daily existence in simple terms.

“I’m a Mexican Jew who came out here to the Valley to live with my family. And now I pretty much live within one square mile. I’m a Valley boy!” he laughs.