Take a peek inside the Encino home of actress and producer Donna Scott.

Donna Scott has lived in some amazing properties throughout her life. After the actress married the late moviemaker Tony Scott (Top Gun, Beverly Hills Cop II, Days of Thunder), the couple and their twin sons lived at the historic Bella Vista estate in Beverly Hills. The sprawling, red-roofed, Spanish Colonial compound was actor John Barrymore’s (grandfather to Drew) home from 1927 until his death in 1942. By then the property had expanded to seven acres and 16 structures, including a famous aviary with stained glass windows. 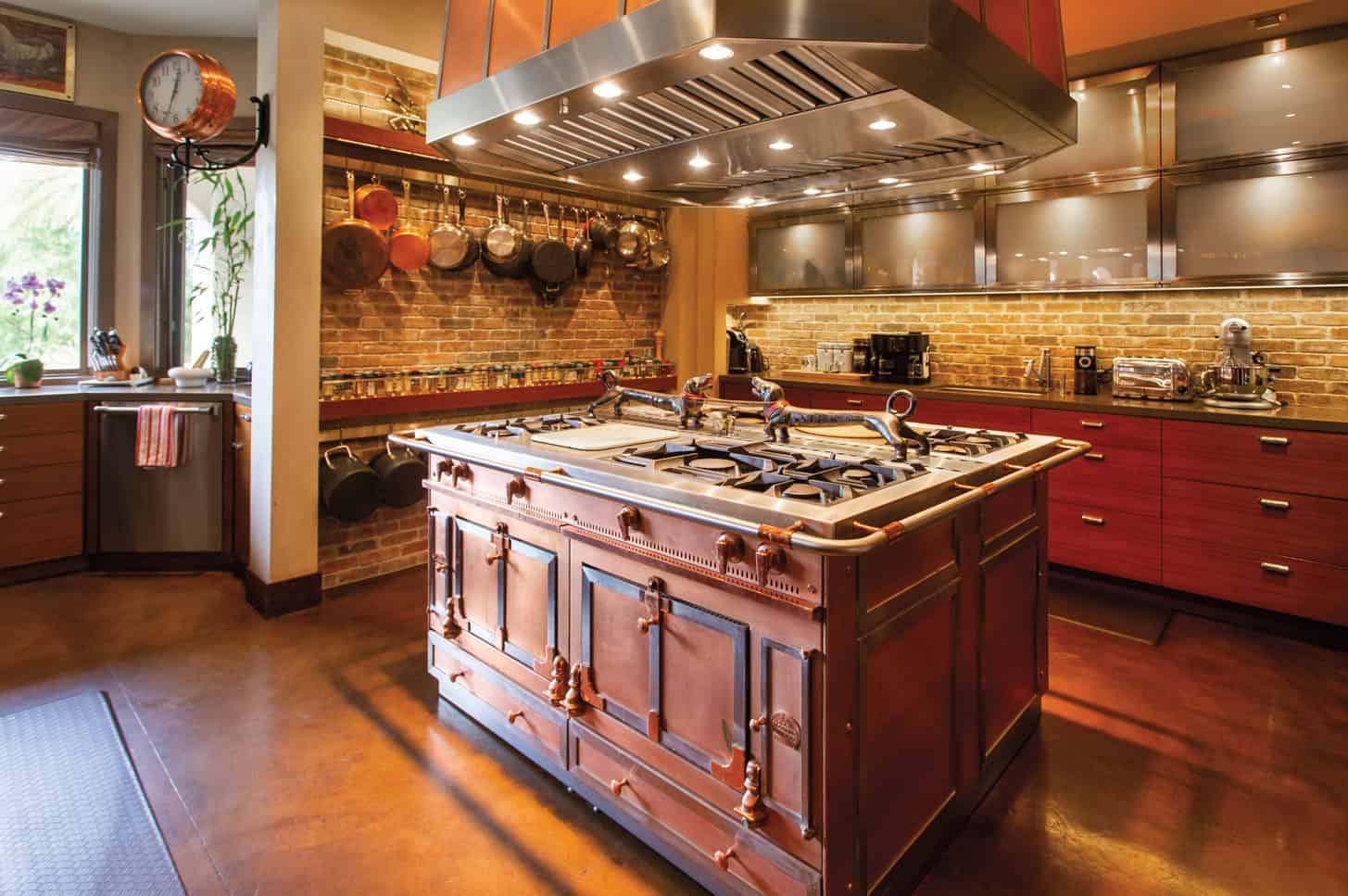 WARM WELCOME
With accents of copper and brick,
and four La Cornue ranges as the centerpiece, the kitchen provides the perfect gathering spot.

The Scott family also spent time at their Malibu beachfront house in the exclusive Colony enclave.

Everything changed when Tony died in 2012.

“The twins, who were then 12-years-old, were attending Oakwood at the time, and they really wanted to live in the Valley, so we started looking,” Donna explains.

The Scott boys got super excited when they saw a 12,000-square-foot, Mediterranean-style home, tucked up in the hills of Encino, that was formerly owned by actor Kevin James (King of Queens).

“Aside from them loving it, what really sold me on the house was the kitchen,” says Donna. The centerpiece of the large space is a freestanding structure comprised of four, massive, Le Corneau copper ranges; two are electric and two are gas-operated. “On the holidays we have all four of those ovens going and it’s fantastic!”

The L-shaped mansion, located at the end of a cul-de-sac, has five bedrooms and nine bathrooms and sprawls across nearly two acres. Every room is filled with art collected from the couple’s travels around the world over the course of their nearly 18-year marriage. “Tony had a master’s degree in art. I learned so much from him. Funny fact: My favorite piece showed up crated in the foyer at our family home in Beverly Hills. He had purchased it somewhere while shooting a movie and sent it home as a present. I was upset because the painting was huge and we had no walls left. Tony said, ‘We’ll put it over the tub in the master bathroom, and that’s what we did!” Donna recalls.

“On the holidays we have all four of those ovens going and it’s fantastic!”

Once the Encino property was purchased, Bella Vista was put on the market. Donna packed as much as she could into their new digs and put the rest in storage. Formal living and dining rooms flank the double-height foyer, where a curved staircase ascends to the upper level bedrooms. Décor is a combination of traditional and modern (“transitional”) with Art Deco influences.

“I love the stories that are conveyed in the Old Masters pieces. They are all so different. And I love the moods that they can make me feel when I take the time to stop what I’m doing and take them in. I do that from time to time! I often look at my home and reflect on my life and take the time to have a little prayer of gratitude,” the North Carolina native shares.

“I intentionally utilized colors that I felt created the best vibe for each environment. When we bought the house, there were already neutral colors on the walls, which created a warm palette for me to work with,” says Donna, who took on the project without the help of an interior designer.

The solar-powered structure also includes a state-of-the-art home theater, a spa with a glassed-in steam room, a billiards room and a second-floor fitness center that spans nearly 1,500 square feet. The dining room, which has an expansive wine cellar lining one entire wall

Despite all the places to hang out, like many of us, Donna spends much of her time in the kitchen, facing the backyard, with her two dogs nearby and the sound of her chirping “lovebirds” as background noise. “I love to sit at the center island with my computer. It’s just really peaceful and cozy. Cozy is what I really like.”

With the kids (now 19) away at college, Donna keeps busy with projects of her own. She is currently co-producing a musical movie, Zombie Broadway, based on the graphic novel by Dave Stewart, from the Eurythmics. The boys (both film majors), along with their mom, have recently formed a production company (Twin Adrenaline) and hope that Zombie Broadway will be their first project after the twins graduate. 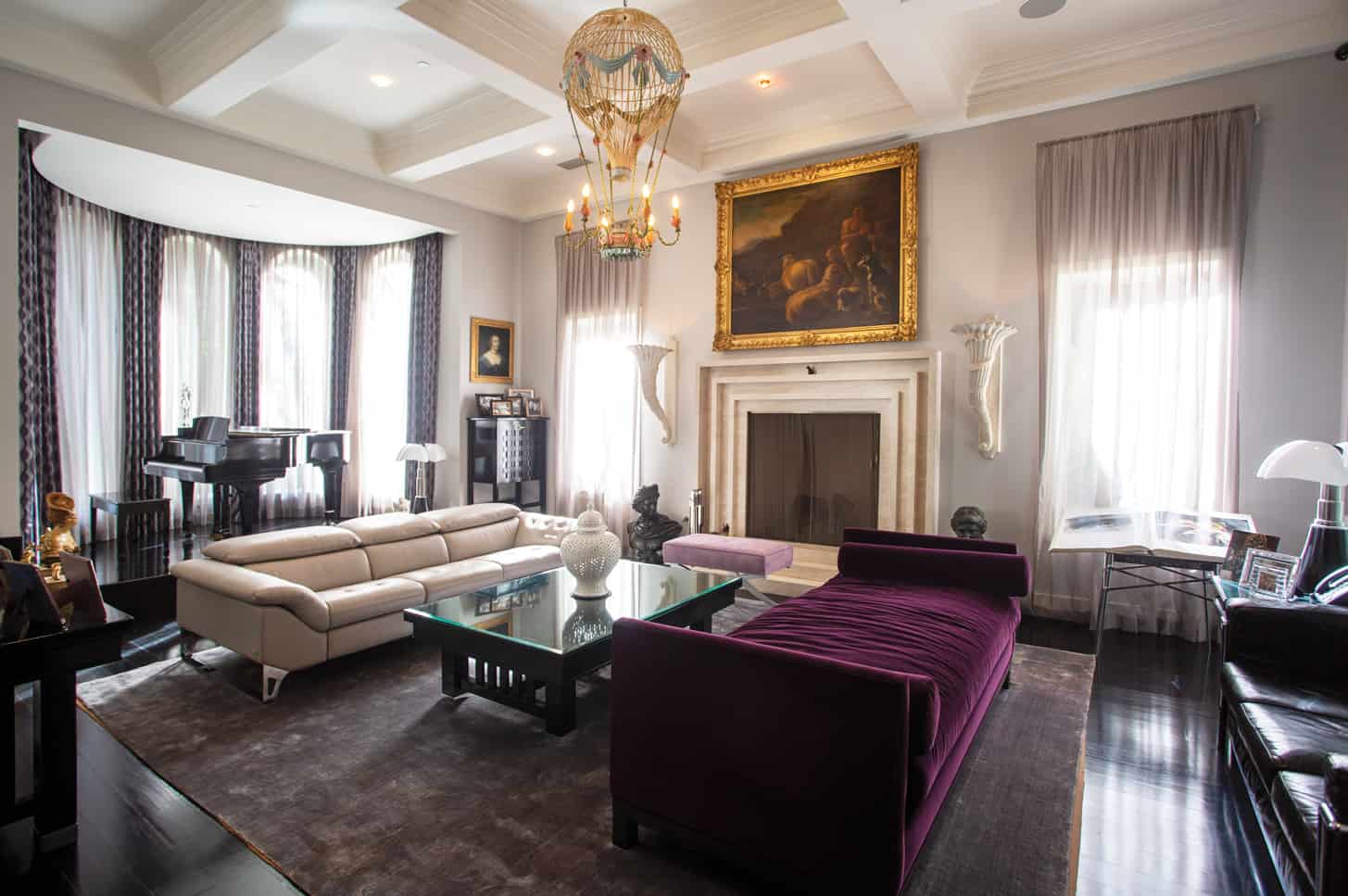