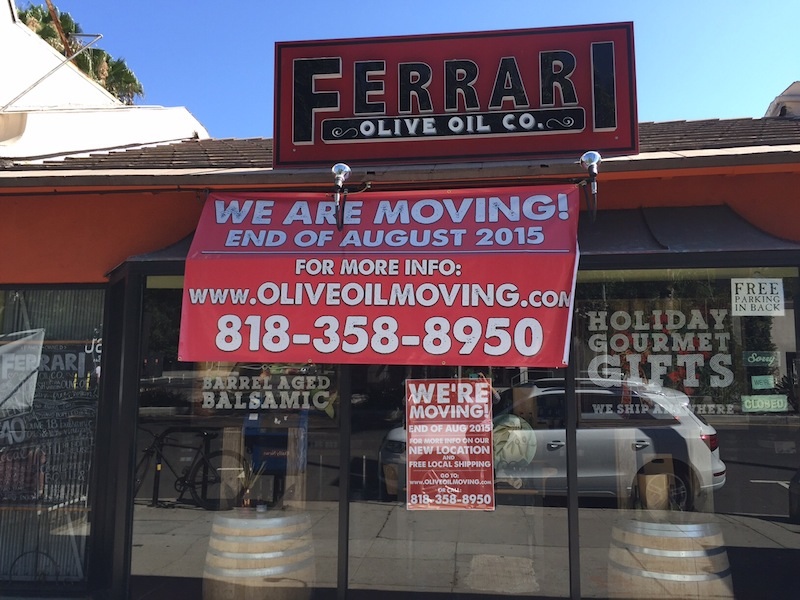 Oh no! Those of us who love olive oil so much we think it should be served as an aperitif (no ice) have been concerned by the ominous red flag that’s gone up on Studio City’s Ferrari Olive Oil Co. after some three years on Ventura Boulevard, stating that this cool tasting room for olive oil/balsamic addicts is moving at the end of August.

But right now you can still wander in from the summer heat to sample elegant olive oils and intense balsamic vinegars bearing the name Olimila Gourmet Emporium, which despite the big red Ferrari sign is the new official name of the family business founded by Alex and Maricruz Ferrari. The new name is a blend of the names of the couple’s twin daughters, Olivia and Mila.

Popular choices include the Arbequina Arbosana Koroneiki (oil) and The Godfather balsamic (vinegar).

But fear no drought in the nectar of the olive: You’ll still be able to find Olimila to garnish your summer garden tomatoes. The big red sign directs you to the website oliveoilmoving.com, where a video reassures you that the company will rise again. Where? “We don’t have the foggiest.” No matter where they end up, the company website states that at least for the foreseeable future Olimila patrons will be able to get their favorites shipped free of charge.